Demonstrating (what counts for me as) great personal restraint, I have held back the obvious Lord of the Rings puns all day as we bid farewell to the two Athlone Cooling Towers… but I can’t help note the allegory to the more unfortunate US event fading rapidly into our combined histories.  Ours, of course, came as less of a surprise – but still somewhat unexpected.

The cooling towers have been a feature in my landscape for as long as I’ve lived in Cape Town: my whole life.  I still recall driving past them as a child every time we set off to Betty’s Bay for a weekend.  The coal power station was still operational then, and one could see the cascades of water through the air intake fins at the bottom of the tower: a living example of the principles of physics that I was foggily beginning to grasp at the beginning of the long process to creating light pour from handy switches around the house.  My father could explain the entire process all the way to Somerset West, and I was enthralled. 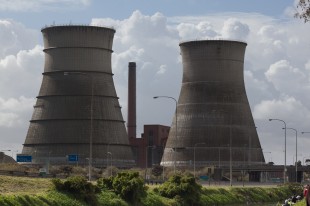 The Athlone Power Station shut down years ago, and since then the towers have gradually declined.  I once missed a chance to abseil from them during a rescue practice because of an ophthalmology tut I was too scared to bunk: what a waste 😉  The city council announcement that they had become structurally unsound and would be demolished didn’t come as much of a surprise, but it certainly jerked a few Capetownian tears.

Despite the girl and I both being badly post-call, neither of us was at all willing to miss something being blown up almost in our back garden.  I had done some reccie work on my trusty Dakar (LOTR reference coming:  it’s name is Hasufel) and selected a spot along the river just across the highway from the towers.  We arrived with dog in tow about 90 minutes early, picnic in hand, and selected a prime piece of river frontage replete with uninterrupted view for my cameras (HD video and DSLR).  As the time passed if became more and more festive, with people from all walks (and limps) of life filling the bank.  Everyone was delightfully polite and careful not to obstruct each other’s views; children played together and Kaptein earned much attention and praise.

With about 30 minutes before the 12h00 detonation time I settled in behind my tripod and did a full systems check: ready.  My watch had been zeroed to SA Standard Time before leaving home.  Occasionally we’d catch a waft of sound from the press tent on the golf-course across the river.  Time passed slowly but lazily, with a festival air.  At T-minus 5 minutes I decided to start my video camera rolling at T-3 just in case of an early detonation, and was shielding it from a short rain shower when we heard a sound drifting across the river…. “…. 3…. 2….. 1….”

AAAARGH!  Just over 4 minutes early!  Everyone scrabbled.  I hit record and yanked my SLR out of my jacket as the explosions zipped across the face of the tower and was shooting within seconds, but the more distant tower was already consumed in dust and smoke.  An unwelcome stranger charged in front of all of us, blocking the video camera, and earning a bout of curses from the petite aunty next to me…. then everyone was whooping and cheering and asking “Did you get it?”

Well, sorta.  Enjoy, the end of the Athlone Ladies.  Click on the images for an enlargement – the second in the series is a beaut to check out the bending and fault lines. 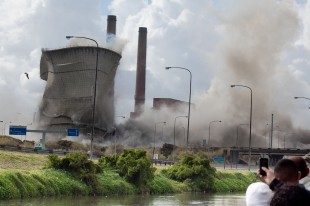 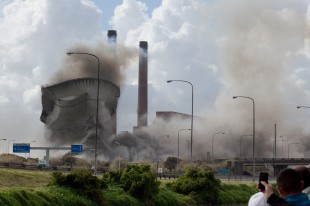 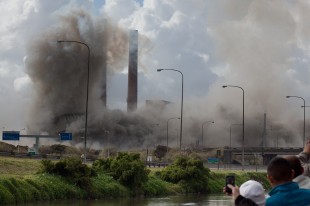 Damn the b@st@rds who hit the button early: I hear the Argus didn’t get a single good photo from their guys on scene and the E-TV reporter looked more shocked that the gulls perched on top when the bang went off 😉

This site uses Akismet to reduce spam. Learn how your comment data is processed.